Renew’s portfolio of engineered enzymes are designed to support enhanced production of cannabinoids and cannabinoid derivatives. While Renew has employed these enzymes towards the company’s neurotherapeutic drug discovery program, these same enzymes can also support microbial biosynthesis of natural cannabinoids. Accordingly, Algae-C has licensed use of Renew’s best-in-class enzymes to accelerate and enhance the production and commercialization of high-value molecules such as cannabinoids. 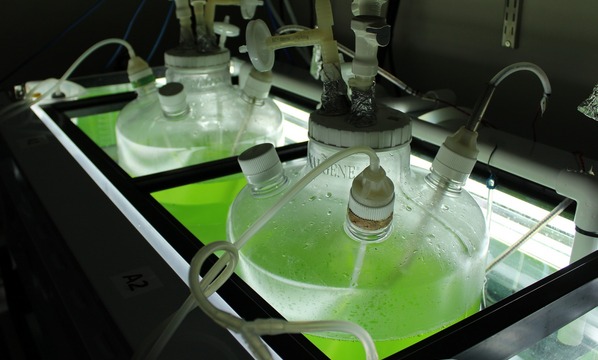 While other companies are developing microbial biosynthesis programs for cannabinoids using traditional yeast and E. coli strains, Algae-C has focused on microalgae as their chassis of choice. Renew’s enzymes have been proven to work in any chassis, and engineered enzymes derived from the Cannabis plant will exhibit superior performance in microalgae, which is itself a single-celled plant and has advantages for large-scale production. Regardless of the chassis used, any successful commercial effort will require state-of-the-art strain engineering with superior patented engineered enzymes to achieve viable production-cost margins.

Renew’s portfolio includes enzymes derived from a prenyltransferase known as NphB. This enzyme produces CBGA and CBG (the precursors required for CBD and THC production), which is a critical step in the cannabinoid biosynthesis pathway. Renew has engineered NphB variants to outperform the natural cannabinoid plant enzymes by orders of magnitude, and these non-natural variants are protected by granted claims associated with patent application WO2019183152. Additionally, Renew has pending patent applications for the engineering of other enzymes in the cannabinoid pathway (including the plant-derived cannabinoid synthases, that create CBDA and THCA from CBGA).

Under the terms of the recent agreement, Renew has agreed to provide Algae-C with exclusive access to its proprietary enzymes for strain development and commercialization using photosynthetic microalgae. Renew will be entitled to undisclosed upfront and milestone payments and is eligible to receive royalties on future product sales.

Michael Mendez, CEO and co-founder of Renew, explains: “Renew has a strong background in the engineering of microalgae and is delighted to see our best-in-class engineered enzymes being put to use by Algae-C to support their path towards commercialization of cannabinoid biosynthesis in microalgae. This agreement supports the field of large-scale microalgae production and monetizes Renew’s valuable intellectual property while we pursue the use of these enzymes for our own drug discovery program and the biosynthesis of alkylresorcinol derivatives.”

Mather Cascallan, CEO and founder of Algae-C, commented: “Having access to Renew’s advanced patented engineered enzymes has significantly accelerated our timelines and production yields as we approach full scale commercialization.”

Mendez added: “World-class enzyme engineering has always been a strategic focus of Renew. As the field of microbial biosynthesis advances and our IP matures, including our most recent granted claims related to [NphB], I envision other additional licensing opportunities with different companies working in yeast, E. coli and even directly back into the Cannabis plants.”

Renew Biopharma, an early startup company based in San Diego, focuses its work on neuroinflammation pathologies. Renew has built a technology platform using synthetic biology and advanced enzyme engineering to create a pipeline of novel molecules that are alkylresorcinol derivatives (similar to CBGA). These therapeutic molecules naturally cross the blood-brain barrier, are non-psychotropic and engage specific drug target receptors with high efficacy. The company’s portfolio includes intellectual property to control composition of matter for a library of engineered enzymes that enable creation and large-scale production of novel therapeutic molecules.

Algae-C is a Canadian-based biotech company that specializes in the development and production of high-value Active Pharmaceutical Ingredients (API) using microalgae. Founded in 2014, Algae-C is the largest algae biosynthetic research company in North America, with over 34 dedicated researchers, including 16 PhDs. Algae-C’s high-value molecules are economical and environmentally sustainable. The company’s APIs have application in the pharmaceutical, nutraceutical, and therapeutic industries among others. Algae-C’s first products to market are cannabinoids.